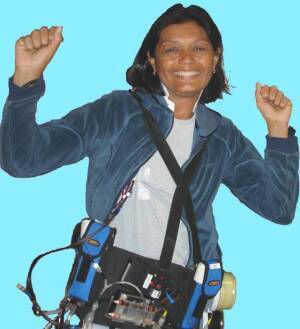 Wearable artificial kidney
prototype; the device
that will go to
the patients will be
smaller and intended to
be worn under clothing
UCLA researchers are developing a device they dub a "wearable artificial kidney" for dialysis patients, according to recent paper published in the Clinical Journal of the American Society of Nephrology (CJASN).

"The device is actually a dialysis machine, worn as a belt, which would provide continuous treatment 24 hours a day, seven days a week," says Victor Gura, M.D., inventor of the experimental device, and a physician at UCLA's David Geffen School of Medicine.

The device weighs about 10 pounds and is powered by two nine-volt batteries. Because patients don't need to be hooked up to a full-sized dialysis machine, they are free to walk, work, or sleep while undergoing continuous, gentle dialysis that more closely approximates normal kidney function.

Dr. Gura says in the CJASN press release that the device could lead to a "paradigm change" in the treatment of dialysis patients.

"Now, patients needing dialysis must endure long hours on the machine every week--with major limitations in activities, diet, and other areas of life," he says. "In addition, dialysis patients face high rates of hospitalization and death."

He notes that the U.S. dialysis population currently exceeds 400,000, with costs of over $30 billion per year. He believes that the portable dialysis machine would not only reduce the "mortality and misery of dialysis patients," but would also result in a significant reduction in health care costs.

The "wearable artificial kidney," as Dr. Gura calls his invention, was successful in preliminary tests, including two studies in dialysis patients. However, the long-term effect of this technology on the well-being of dialysis patients must be demonstrated in clinical trials, Dr. Gura says.

He adds, "Although successful, this is but one additional step on a long road still ahead of us to bring about a much-needed change in the lives of this population."

Sources: Clinical Journal of the American Society of Nephrology; UCLA.