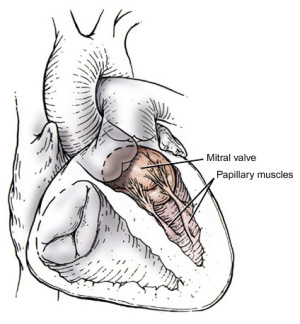 The PTMA system consists
of a repair device
contained inside
a catheter
A new nonsurgical technique to repair leaking mitral valves in heart failure patients was found to be safe, in a study reported in the journal Circulation.

"Heart failure prevalence is worsening, and we know that the outcome of congestive heart failure is worse when mitral regurgitation is present," said Stefan Sack, M.D., Ph.D., lead author of the study and chief of cardiology, pneumology and intensive care at Schwabing Hospital in Munich, Germany.

The PTMA system consists of a repair device contained inside a catheter. The catheter is threaded through a vein into the coronary sinus, which rests at the back of the heart and collects most of the blood returning from the heart. The catheter is pushed up to the mitral annulus, a fibrous ring encircling the mitral valve, and anchors the device in place.

Tiny, shaped metal rods made of a nickel-titanium alloy are inserted into the catheter. The combination changes the shape of the mitral annulus and allows the valve's two leaflets to close more tightly and prevent blood leakage.

In the study, Sack and colleagues at one Canadian and four European centers evaluated 27 patients divided into four groups between April 2006 and November 2007. The patients' average age was 70. Researchers made device improvements and refined their diagnostic and implantation techniques between each successive group.

Nine patients received PTMA implants, but researchers removed four devices - one due to fracture and three because they had shifted position.

No deaths, heart attacks, strokes or emergency surgeries occurred among the 27 patients. Four patients suffered at least one major adverse event - including pneumonia, temporary kidney dysfunction or an abnormal accumulation of fluid around the heart.

If proven effective, the PTMA system could significantly reduce risks associated with surgical repair of the mitral valve, the study authors say. Today, the operation requires opening the chest and putting the patient on a heart-lung machine, which carries some risk of heart attack and stroke during surgery, and infection, lung problems and irregular heart beats afterward.

However, the study showed that the PTMA system does not work with all patients due to a variety of anatomic and disease specific causes.

Researchers said it's too soon to gauge the clinical impact of the device.The research team is now engaged in Ptolemy-2, a larger follow-up trial assessing the PTMA system's efficacy and further confirming its safety.