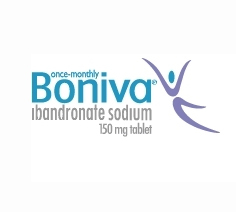 Drugs like Boniva may help
cancer patients one day
Mice given high enough doses of radiation to cause leukemia remained cancer free after receiving one of two types of bisphosphonates, drugs that build bone mineral density in people with osteoporosis. Leukemia is a common side effect in cancer patients receiving radiation therapy.

Alexandra Miller, a scientist at the Armed Forces Radiobiology Research Institute in Bethesda, MA, says that one of the bisphosphonates she studied is called ethane-1-hydroxy-1, 1-bisphosphonate, or EHBP, which resembles the drug "Didronel", or etidronate, made by Procter & Gamble.

The other medicine she tested is an investigational drug called CAPBP, which Miller said is chemically similar to Roche's "Boniva" or ibandronate.

Miller selected these two medicines because clinical trials indicate they may also help keep cancer from spreading to the bone. The drugs have also been shown to remove uranium from the body.