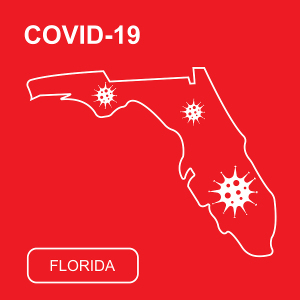 Doctors in Florida held a new conference to address concerns about COVID-19 and did not walk out on the job, contrary to a false report circulating online
More than 70 doctors in Florida are shutting down false claims that they walked off the job out of frustration with their state’s pandemic response after a bogus report saying that they did started making the rounds online.

The 75 physicians gathered before television crews Monday in Palm Beach Gardens, Florida, to encourage Floridians to get vaccinated and wear masks, as the state grapples with a surge in COVID-19, according to the Associated Press. The event was held before office hours at 6 a.m. so as not to interfere with patient visits.

MSNBC’s “Morning Joe”, which was covering the conference, misinformed viewers at home into thinking the doctors were staging a walkout or protest when it aired an on-screen caption, “South Florida Doctors walk out in protest.”

The network put out an on-air correction the next day, calling the event a “symbolic demonstration” to raise awareness. The caption, however, had already caught the attention of social media users and other news organizations, with some criticizing the doctors for allegedly holding back treatment.

Since then, the doctors say they, their colleagues and hospitals have faced threats and harassment. "This was a physician-driven press conference to encourage our community to get vaccinated and talk about the impact this has had on our community," Dr. Jennifer Buczyner, a neurologist who organized the news conference, told the AP in an email.

Dr. Leslie Dias, infectious disease chair at Palm Beach Gardens Medical Center, told Morning Joe host Joe Scarborough Tuesday, following the on-air correction, that the number of cases they were facing had left every doctor “tired” but that they continued to tend to patients.

“You walk into the ER and it’s like a war zone. There are patients everywhere, in the hallways, in each room ... they come in faster than you can move. It’s very taxing on all the healthcare providers … we’ve been doing this since the beginning of July. It doesn’t seem to want to stop,” she said.

Florida saw more than 21,000 new cases added per day in mid-August, with more than 16,000 people hospitalized with COVID-19 Tuesday. This was slightly better than the week before, when over 17,000 were hospitalized, according to federal government figures.

Dr. Naveen Reddy, a gastroenterologist in Jupiter, Florida, said he attended the news conference and still made it on time to his 7:30 a.m. endoscopy procedure. "So there was not even a delay in care," he said.

Buczyner said that some of the doctors had finished 12-hours shifts when they came to the conference or arrived before their shifts began, but that no one had walked off. She, herself, saw 25 patients afterward.

"The hospitals and our offices are receiving hate calls," she said. "This was supposed to be a heartfelt positive message."