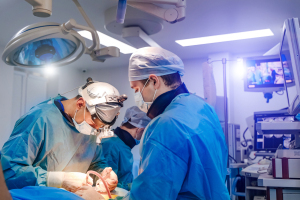 The research will use AI to assess data from neuroimaging of surgeons performing specific tasks to see if they can improve their skills
Rensselaer Polytechnic Institute and the University of Buffalo received a $2.2 million grant for a two-step project aimed at improving surgeons’ skills using AI and neuroimaging.The grant was supplied by the U.S. Army Medical Research and Development Command of the U.S. Department of Defense.

The first phase of the project determined surgeons' skill levels by utilizing AI to assess images of them performing technical tasks, according to WAMC Northeast Public Radio.

“When we've been evaluating surgeons, or evaluating a pianist, or evaluating a sports person, essentially, what we've done is look at external measures, look at how the hand is moving, or how certain metrics of motion are being recorded. And that has worked well, except that we did not really know how many of those things we have to record to actually figure out whether somebody is becoming better at something,” Suvranu De, director of CeMSIM, Rensselaer's Center for Modeling, Simulation, and Imaging in Medicine, told WAMC Northeast Public Radio.

During phase one, surgeons completed technical tasks while their brain activity was neuroimaged. A deep neural network then assessed and quantified each individual’s level of learning and skill to see if there was potential for improvement.

Researchers plan to see in the second phase if neuromodulation impacts neural activity and influences learning. They will look at the brain activity of medical students performing technical tasks while neural stimulation is applied. Participants will wear special headgear that allows laser light to help researchers see brain activity.

The aim according to De is to capture the mindset a person is in when they can perform a task automatically, without thinking. "They will actually go through the skull, and the tissue directly into the brain, and then those are scattered by the turbidity of the brain, then we can actually pick up that scattered light that comes reflected back from the brain tissue. And that's what gives us the indication as to what is happening in the brain, which parts of the brain are active, which are not, how the activity is changing, and so on."

Research is being conducted on brain computer interaction, which is expected to help push further development of the technology for recording activity in one brain and creating interactions with another.