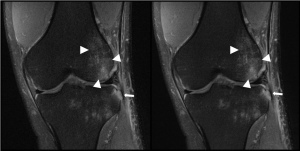 fastMRI can speed scans up four times as fast by using one-quarter of the information collected by a conventional scanner, without deteriorating image quality.
From the November 2020 issue of HealthCare Business News magazine

From reconstructing low-dose images to triaging critical cases, AI is already beginning to change the way some radiologists work, communicate and complete tasks on a day-to-day basis. For the last couple of years, the industry has seen the writing on the wall — but now real results are starting to emerge.

The fastMRI collaboration between NYU Langone Medical Center and Facebook is a prime example. The project was announced in 2018 as a way to leverage AI to extract information from less data, speeding up MR scans without compromising diagnostic quality. Now, new research published in the American Journal of Roentgenology shows that the team’s scans are just as effective as traditional MR.

“If we are able to accelerate MR, then more people will have the ability to get an MR scan,” Dr. Michael Recht, Louis Marx Professor and chair of radiology at NYU Langone Medical Center, told HCB News. “We anticipate the cost of MR will come down as well.”

Realizing the advantages of AI with actual applications is an exciting frontier for medical imaging, but it demands a measured dose of skepticism in order to succeed. Not all algorithms are created equal, and when limitations go unaddressed, it can adversely impact patient safety.

Faster scans, scheduling and triage
The teams working on fastMRI have produced scans up to four times faster than traditional MR systems with one-fourth of the data acquired. A dramatic reduction in scan time could eradicate problems associated with scanning certain patient populations, such as claustrophobia and the need for sedation.

“If you can reconstruct an acquired image with one half the data we usually acquire or one fourth of the data, it means the examination will be twice or four times as fast,” said Recht. “We use the neural network to, in essence, recognize what information is important in advance and acquire just that information.”

One of the things that make image reconstruction, like many other forms of AI, so exciting is that it operates behind the scenes. “Those applications are going to be built into the scanning device and be part of what the scanner does to produce the images, and no one will necessarily even know that,” said Dr. Daniel Rubin, a professor of biomedical data science, radiology and medicine at Stanford University.

Myriad AI solutions are in development to change every aspect of medical imaging from underneath the surface. For Rubin, the impact these applications will have on upstreaming tasks such as scheduling or determining who requires scanning immediately, in addition to downstreaming tasks such as triaging images, is just as important. Regardless of the pain point an algorithm may address, experts agree that radiologists themselves will remain vital.
1(current)
2
3
4