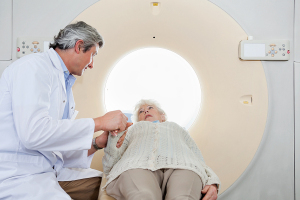 CT scan volume dropped by close to 3.7 million below the anticipated number for 2020
Nearly 3.7 million fewer CT scans than expected have been performed this year in the U.S. as a consequence of the ongoing COVID-19 pandemic, according to a new analysis.

A decline of 38,000 CT scans was seen on an average day during the worst parts of the crisis, with the largest drops seen in areas with higher-density populations and greater unemployment rates. CT visits were at about 84% of expected volume by September 30, indicating a “blunted recovery,” and that since CT volume never recovered to the levels predicted for it, a substantial proportion of care was not just deferred but not provided at all, according to lead author Dr. Matthew Davenport.

"It is likely that delayed and deferred care has had negative health implications for disease states unrelated to COVID-19," Davenport, service chief of radiology and associate chair of operations at Michigan Medicine, told HCB News. "We do not yet have a complete picture of what those negative effects are, and we don't know whether those negative effects were outweighed by the positive effects of avoiding disease spread in the early months of the pandemic. Examples include delayed diagnosis and treatment of cancer."

The group analyzed data from 2,398 hospitals, academic facilities and free-standing imaging practices combined and scattered across all 50 states. All were participants in the American College of Radiology’s Dose Index Registry.

Volume data from between January and the end of September showed nearly 15.2 million CT scans conducted. This was 19% fewer than the 18.9 million projected for the year based on 2019 data. States, on average, reached a bottoming-out point about 32 days into their emergency declaration and 12 days after stay-at-home orders were implemented. The average low point at that stage was a roughly 53% decline in CT volume.

Davenport and the other authors, who came from multiple institutions, said a decrease in non-COVID-19 diseases is unlikely to be the cause for the drop in CT scans. They note that the rebound occurred as positive COVID-19 tests rose and deaths declined, and chalk it up to four factors:


Further studies are needed to assess the indirect clinical effects that come with discontinuing clinical services, though Davenport says that advanced safety protocols at most health systems should prevent future scenarios like this.

"Patients can be imaged safely despite prevalent disease in the community," he said. "Therefore, it is unlikely that we will see similar marked reductions in routine care during the current or future spikes in disease activity."

The pre-proof analysis of the study was published in the Journal of the American College of Radiology.