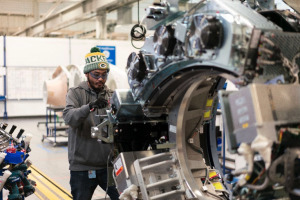 GE Healthcare team member in Wisconsin assembling a CT system Courtesy: GE Healthcare
GE Healthcare has announced plans to expand operations at its Electric Avenue in West Milwaukee and Research Park in Wauwatosa facilities over the next few years with more than 1,500 Wisconsin-based employees.

The company says the intent is to create a global showcase for CT wing-to-wing manufacturing and engineering.

“We saw an opportunity to better use existing capacity and make significant investments that would both reaffirm our commitment to manufacturing and product development in the state, and create an advanced medtech hub in metro Milwaukee,” said Tom Westrick, president and CEO of life care solutions for GE Healthcare, in a statement.

After required bargaining with representative unions, the company hopes to sell portions of its Waukesha campus and transfer most existing teams to other local sites, with the exception of the MR buildings. They have also acquired an 87,000-square-foot facility next door to the Electric Avenue facility — the company’s first site, established in 1947 — as part of the expansion.

With more than 6,000 employees and 1,000-plus suppliers across Wisconsin providing CT, MR, X-ray, services, life care solutions, engineering, supply chain and more, the company claims an $8 billion annual economic impact on the state.

“This $50 million-plus project would represent one of the largest one-time investments in a U.S.-based GE Healthcare site, and we’re excited to expand our footprint in West Milwaukee, a Federal Economic Opportunity Zone,” said Mike Barber, GE Healthcare’s vice president and general manager for platforms and solutions, in a statement.

Ben Fox, director of global communications at GE, told HCB News that the company will create one of its “first lean facilities globally that covers the manufacturing continuum from raw materials all the way to finished goods and launch. Our intention is that this newly expanded and modernized campus in Milwaukee County, Wisconsin will stand as an industry-⁠leading show site for CT globally.”

This comes despite the 21% decline in revenue GE Healthcare faced in July, with segment profits dropping from $958 million to $550 million, mostly due to disruptions brought on by COVID-19. GE chairman and CEO H. Lawrence Culp said although demand for COVID-19-related products increased it wasn’t enough to offset the decreased demand for other items, including a lower volume in pharmaceutical diagnostics.

“Our state is a global manufacturing powerhouse, and our reputation is reinforced by having companies like GE call it home,” said Missy Hughes, secretary and CEO of the Wisconsin Economic Development Corporation. “It also shows that Wisconsin’s skilled, dedicated and well-educated workers compete with the best in the world.”