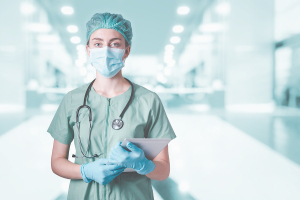 As COVID-19 cases stacked up and overwhelmed numerous hospitals in mid-April — particularly in states such as New York and California — local governments scrambled to find alternative space to treat patients. Many transitioned large convention centers and sports arenas into makeshift hospitals, spending millions of dollars on construction, equipment, and medical staff. Months later, data indicates many of these investments were futile.

The Sleep Train Arena in Sacramento, for example, was turned into a temporary hospital with 250 physicians, nurses, pharmacists, and administrative staff on hand and ready to treat 30 to 60 coronavirus patients within days. It was one of 15 temporary sites set up across the state. Yet, during the first week, it received only one patient, reported the Associated Press. In fact, the arena saw a total of just nine patients during the 10 weeks it remained open before closing shop on July 1 — at a cost of $12 million.

“People began to question within themselves whether they were really needed or not,” Dr. Charles Moore, a retired internal medicine physician who worked there for about six weeks told the AP. “There were no plans for what would happen if you gave a party and no one came.”

The state rented the space from NBA’s Sacramento Kings, along with a neighboring building also owned by the team for $1 million. Another $7 million was spent on mechanical, electrical, plumbing, and other improvements, according to the Department of General Services. Staffing cost $2.8 million, personal protective equipment ran another $500,000, and an additional $1 million went for other expenses.

A shuttered hospital in Los Angles also reopened to care for COVID-19 patients exclusively. Shut down since January, St. Vincent Medical Center was revamped with essential equipment and supplies in just a matter of weeks.

California hospitals were already bracing for a $16.7 billion net loss in revenues by April 2021 in the wake of the COVID-19 pandemic, according to a data analysis prepared by Kaufman Hall, as elective and non-emergency services were cancelled to make room for a surge in COVID-19 patients, following the declaration of a State of Emergency by California Governor Gavin Newsom. Even before the pandemic began, 40% of California hospitals had negative margins.

Over in New York — the epicenter of the coronavirus — temporary hospitals were also expanding, including the Javits Center, which was outfitted into a 1,000-bed operation. Another one was erected at the U.S.T.A. Billie Jean King National Tennis Center with hundreds of beds and medical staff to handle COVID patient overflow. But like the Sacramento Arena, few patients were treated at the new field hospital, and it cost more than $52 million, according to the New York Times.
1(current)
2