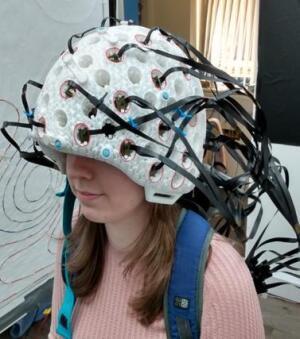 Researchers at the University of Nottingham and University College London in the U.K. built an initial prototype of the lightweight device in 2018 and have since developed it to the point where it can produce millisecond-by-millisecond images that show which parts of the brain are engaged when undertaking a specific task, such as speaking or moving. They assert that such a capability will provide greater insight on mental health problems afflicting patients.

"In a wearable system, the sensors move with the head and so are always in a fixed position relative to the brain," said Ryan Hill, MSci, who headed the research at the University of Nottingham, told HCB News. "Field nulling coils are used to greatly reduce the remnant magnetic field so that unwanted magnetic fields (generated by moving through the field) do not obscure the signals from the brain. Now that participants can move while being scanned, it allows us to explore new, more naturalistic paradigms but also new populations that typically find it difficult to remain still in conventional systems, like children or epileptic patients during seizures."

Conventional MEG scanners is affected because the participant moves relative to the sensors, which are fixed in position. This leads to distortions in images. Even highly detailed brain scans fail to show the underlying pathology that could potentially be responsible for mental illness, which can range from Autism to Alzheimer's disease.

Initially built with 13 sensors that enabled imaging of some parts of the brain, the solution is now configured with 49 sensors that allow it to scan the entire brain and track electrophysiological processes implicated in a number of mental health problems. It does this by using MEG to measure tiny magnetic fields generated by electrical currents (produced by brain cells) to map brain function.

The patient is able to move freely when wearing the scanner, which consists of a novel type of 3D printed helmet produced by Added Scientific, a 3D printing service company in Nottingham that is collaborating with the universities on the project. The scanner can show correlations between a number of tasks and parts of the brain, such as areas controlling hand movement and vision, pinpointed with millimeter accuracy. The use of OPM-MEG also enables users to access the so-called neural oscillations (or brain waves) which are thought to be (at least in part) responsible for mediation of connectivity.
1(current)
2