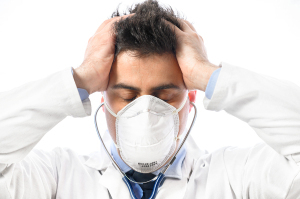 The privately-held medical staffing company heard from more than 1,200 providers and found a decrease in work hours among more than 70% of respondents — an unusual occurrence in healthcare — coupled with higher levels of anxiety and a desire to restart elective procedures and end stay-at-home orders.

“Struggling to work and worrying about the future are challenges for millions during this COVID-19 crisis, and these results show that the medical profession is impacted as much as many other areas,” said Scott Beck, CEO of CHG Healthcare, in a statement. “Few would expect rising unemployment rates for doctors during a public health crisis, but the numbers who are out of work or working less are shockingly high.”

PAs and NPs reported feeling greater anxiety despite 41% of respondents not treating any patients with COVID-19 or its symptoms. Bringing home the virus to family members or loved ones was a concern for 68% of respondents, while 56% were worried about becoming infected themselves.

Though layoffs and furloughs rarely occur in healthcare, 74% said they are working less since the outbreak, with 43% attributing the decrease to lower patient volumes and 26% to paused elective care. Seven percent said they were laid off, while 6% said they were furloughed. Only 50% considered themselves to be working full-time.

A number of studies have recorded massive declines in patient volumes and elective procedures, including one that found a more than 50% dip in imaging utilization — particularly for outpatient facilities. The U.S. Bureau of Labor reported a jump in unemployment by 10.3 percentage points to 14.7%, with 1.4 million job losses recorded in the healthcare sector.

Most providers (73%) said in the survey that they hope to offer elective care again within the next month, with 62% indicating that they want stay-at-home restrictions in their states to ease in the same time frame.