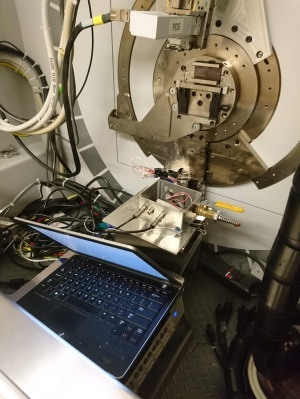 That’s what researchers at North Carolina State University are saying after finding the material was able to withstand high levels of radiation. They assert in their paper, Fast X-ray detectors based on bulk β-Ga2O3 (Fe), that gallium oxide may be faster than many existing materials incorporated in X-ray detectors and could be an asset to medical imaging.

“Gallium oxide based detectors have high radiation resistance and their density is relatively high compared to conventional and emerging X-ray sensing material which makes them have high stopping power for incoming X-ray radiation and allow them to be operated for longer times without device deterioration,” Ge Yang, an assistant professor of the department of nuclear engineering at NCSU and and corresponding author of a paper on the work, told HCB News. “We have shown that their response can be two orders faster than what previously reported which highly encourages further research in that area.”

The radiation hardness of gallium oxide enables it to continue doing its job even when exposed to high amounts of radiation. Detectors that are built with it can be operated without the need for cooling, which enables them to be incorporated in different images systems. They also can be used without external applied voltage as well as with low applied voltage of 5 V, opening the path for their use in passive, remote and possibly handheld devices.

The team developed a radiation detector with a single-crystal sample of gallium oxide. Electrodes were attached on either side of the material and different bias voltages were applied across it while it was exposed to X-ray radiation.

“The next step would be testing their imaging capability and their operation in a harsh environment, such as a high temperature environment,” said Yang. “Evaluating their characteristics as X-ray imagers is very important at this stage to assess many key parameters such as spatial resolution, temporal resolution as well as the possible dynamic range achieved with Gallium Oxide based X-ray cameras. Furthermore, it's very interesting to test their operation at harsh environment conditions as this can open new possibilities for Gallium Oxide based X-ray detector applications.”

The findings were published in the Journal of Materials Science.