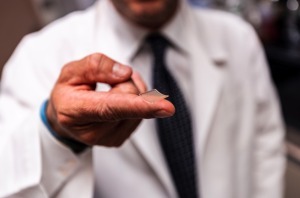 The vaccine is delivered into the skin through a fingertip-sized patch of microscopic needles
A new COVID-19 vaccine developed by University of Pittsburgh School of Medicine (UPSM) scientists has shown promise in mice, according to a peer-reviewed paper appearing yesterday in The Lancet's EbioMedicine.

The vaccine was delivered to the test animals via a fingertip-sized patch, making SARS-CoV-2 antibodies “at quantities thought to be sufficient for neutralizing the virus,” within a couple of weeks of injection, said researchers in a statement.

Key to the speedy development was the researchers prior experience with SARS-CoV in 2003 and MERS-CoV in 2014.

“These two viruses, which are closely related to SARS-CoV-2, teach us that a particular protein, called a spike protein, is important for inducing immunity against the virus. We knew exactly where to fight this new virus,” said co-senior author Dr. Andrea Gambotto, associate professor of surgery at the Pitt School of Medicine.

In addition to developing the vaccine, the Pittsburgh team came up with a new approach to drug delivery: using a microneedle array, which boosts potency.

The patch has 400 small needles that drive the spike protein pieces into the skin, maximizing the immune reaction. The patch is made of sugar and protein, put on like a Band-Aid, and it dissolves into the skin.

“We developed this to build on the original scratch method used to deliver the smallpox vaccine to the skin, but as a high-tech version that is more efficient and reproducible patient to patient,” explained co-senior author Dr. Louis Falo, professor and chair of dermatology at Pitt’s School of Medicine. “And it’s actually pretty painless — it feels kind of like Velcro.”

Production in mass quantities is also possible with the team's approach as the protein bits are made using a “cell factory” of multiple layers of cultured cells that express the SARS-CoV-2 spike protein. The microneedles are also scalable, as they are made by centrifuging the protein-sugar mix into a mold.

“For most vaccines, you don’t need to address scalability to begin with,” Gambotto said. “But when you try to develop a vaccine quickly against a pandemic that’s the first requirement.”

Another plus is that these needle arrays can be kept at room temperature, with no need for refrigeration. The patches also stay potent after gamma radiation sterilization — needed to make a product for human use.

While the test mice haven't been followed long-term, this latest vaccine was built on earlier MERS-CoV vaccine work, which did make enough antibodies to neutralize that virus for at least a year and “so far the antibody levels of the SARS-CoV-2 vaccinated animals seem to be following the same trend,” the authors stated.

The vaccine is now heading through the FDA approval process with hopes to begin phase I clinical trials in a few months.

Human testing usually takes a year or more to begin. But “this particular situation is different from anything we’ve ever seen, so we don’t know how long the clinical development process will take. Recently announced revisions to the normal processes suggest we may be able to advance this faster,” Falo advised.