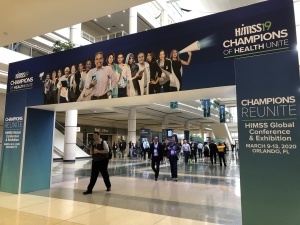 Attendees at last year's HIMSS meeting
The Healthcare Information and Management Systems Society (HIMSS) annual meeting, scheduled to begin on Sunday at the Orange County Convention Center, West Concourse, Florida, has just been canceled amid growing concern regarding the spread of coronavirus (COVID-19).

The decision comes just a few days after the news broke that President Donald Trump had been added on as a last-minute speaker at the event.

“We recognize all the hard work that so many have put into preparing for their presentations and panels that accompany every HIMSS conference,” said Hal Wolf, president and CEO of HIMSS, in a statement. “Based on evaluation of evolving circumstances and coordination with an external advisory panel of medical professionals to support evidence-based decision-making, it is clear that it would be an unacceptable risk to bring so many thousands of people together in Orlando next week.”

The advisory panel recognized that industry understanding of the potential reach of the virus had changed significantly in the last 24 hours, according to the statement, which has made it impossible to accurately assess risk. Additionally, there were concerns about disproportionate risk to the healthcare system given the unique medical profile of HIMSS attendees and the consequences of potentially displacing healthcare workers during a critical time.

Several leading healthcare IT companies have announced this week that they would not be attending HIMSS due to coronavirus concerns. Other industry events, such as the European Society of Radiology (ESR) annual European Congress of Radiology (ECR) in Vienna, Austria, have also been canceled or rescheduled.

This will be the first time in 58 years the event has been canceled. Exhibitors and attendees will reportedly be contacted with further information regarding booth contracts and registrations.