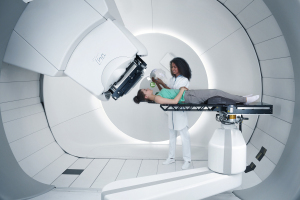 Proton therapy has a similar cure rate but
with fewer side effects, compared to X-ray
radiation therapy, says a new study
Researchers in Missouri and Pennsylvania are touting the results of a new study they believe all but confirms the hypothetical benefits of proton therapy.

X-ray radiation treatments can cause severe side effects, such as difficulty swallowing, nausea, and diarrhea. These unpleasant experiences can reduce quality of life and in some cases, require hospitalization.

Researchers assessed 1,500 patients with different types of cancer at Penn Medicine in what they say is the first large review of data across several different forms of malignancies, to demonstrate the reduction in PT-induced side effects compared to those of conventional radiation. Patients received combined chemotherapy and radiation for lung, brain, head and neck, gastrointestinal and gynecological cancers. None were metastatic.

Little to no differences were found between the two in survival and cancer control at one year, (83 percent for PT patients, compared to 81 percent for X-ray RT patients), a finding which supports the assertion that PT is just as effective in treating cancer despite there being fewer side effects.

Differentiation in side effects was more distinct, with 45 of 391 PT patients (11.5 percent) experiencing a severe one within the first 90 days. This was in contrast to 301 of 1,092 in the X-ray RT group (27.6 percent) that experienced a severe side effect in the same time frame. Upon making adjustments to control differences, researchers found PT patients had a reduction of two-thirds in the relative risk of severe side effects within the first 90 days, compared to X-ray radiation patients.

In addition, patients who received proton therapy as a treatment were, on average, older and had more medical problems than those who received X-ray radiation, and yet still experienced fewer side effects. This suggests that older patients with multiple medical conditions, who are often excluded from intensive treatment trials due to frailty, may actually benefit from taking part in them.

The authors believe the findings will help others develop clinical trials that investigate if increasing proton radiation dosage helps patients more without causing as many severe side effects. They also believe the decrease in side effects will offset the higher initial costs associated with PT, a fact which had made private insurers hesitant to cover it, along with the limited amount of data on its efficiency compared to X-ray radiation.

“We have plans to investigate the cost-effectiveness of proton therapy,” said Baumann.

The findings were published in December in JAMA Oncology.