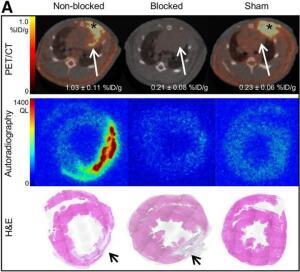 The team has gained greater insight into the recovery process of hearts that have undergone myocardial infarction, with the use of 68Ga-FAPI-04 PET, a radiopharmaceutical that can target fibroblast activation prior to it causing permanent damage. Its application enables clinicians to identify a window of time in which cardiac fibrosis, which can contribute to heart failure, can be prevented and the course of the disease altered.

"MR measures already established fibrosis. Fibrosis is the consequence or end-point of the fibroblast activation. Once fibrosis has developed, it will generally be challenging to reverse it," the authors told HCB News. "Therefore, identifying biomarkers that are able to specifically visualize fibrosis, ideally already at its onset, may help to establish therapeutic interventions that can assist in preventing cardiac fibrosis. In contrast to fibrosis, imaging of activated fibroblasts using 68Ga-FAPI-04 provides indirect evidence of the rate of fibrosis formation, and hence may identify a time window during which fibrosis can still be prevented and the disease course altered."

A lack of sensitive and specific imaging technologies has limited clinical validation of potential anti-fibrotic approaches, despite advanced development of them in preclinical studies. The use of 68Ga-FAPI-04 PET is expected to help advance imaging in this regard and may be helpful in addressing other related conditions.

"Cardiac fibrosis is a significant global health problem that is associated with nearly all forms of heart disease. Therefore, we believe that imaging fibroblast activation before it causes permanent damage (fibrosis) may be an important tool in the efforts improving heart failure therapy," said the authors. "In the near future, we are aiming to study the efficiency of 68Ga-FAPI-04 PET imaging in different cardiac conditions associated with the activation of fibroblasts, such as hypertension, ischemic, dilated and hypertrophic cardiomyopathies, and cardiotoxicity.

The findings were published in the The Journal of Nuclear Medicine.