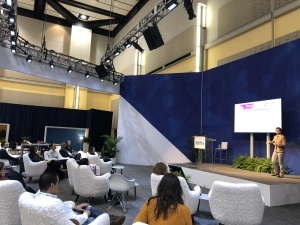 #RSNA19
Unconscious gender and racial bias can creep into healthcare hiring decisions, and it’s important for those in leadership roles to recognize it and work to remove it from the process, an inclusion expert told an audience at RSNA.

Dr. Carolyn Meltzer, chair of radiology and imaging sciences and executive associate dean of faculty academic advancement, leadership and inclusion at Emory University School of Medicine, spoke about how biases can affect decisions in ways of which we aren’t even aware.

“Those things can take a long time to really dissipate, and sometimes never,” said Meltzer, a neuroradiologist and nuclear medicine physician. “But being aware of them is important when we make decisions.”

Following recent headlines about the racial bias in a widely-used algorithm that determines patient risk, there were several sessions at RSNA focusing on how bias affects the industry.

During her talk about bias in the radiology hiring process, Meltzer recounted a 2012 study that looked at 127 science faculty members at large research universities in the U.S., who were asked to rate applications for a student lab manager position. The fictional applicants were randomly assigned male and female names.

The faculty members were asked to rate how competent they thought the student was and how interested they were in hiring and mentoring them, as well as how much they were going to pay them.

The study found that the faculty members rated the applicants with male names as more competent, they were more interested in hiring and mentoring that individual and they assigned them higher salaries.

Meltzer noted that people often assume that women are paid less because they are less likely to negotiate, but the study showed there was a disadvantage from the beginning.

“There is no negotiation there, these aren’t real students,” Meltzer said. “There’s a shared sense of lower value.”

Hiring managers should be conscious of how they word job descriptions, Meltzer said, as there are words and phrases that cause people not to apply. Data shows that men with similar credentials to women feel more comfortable applying for positions in which the job ad has the phrase "proven track record."

Meltzer recommended looking for websites that will flag gendered wording in job ads.

Letters of recommendation have also been found to promote biases, with letters for male applicants tending to be longer and stronger, and words that were more distinguishing, such as “brilliant” and “trailblazer.”
1(current)
2