The top five takeaways from ASTRO 2019 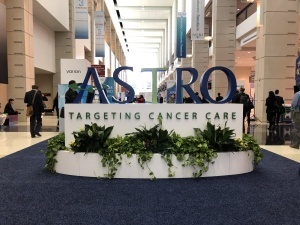 ASTRO 2019
There is no denying that artificial intelligence (AI) has been a seemingly ubiquitous buzzword in healthcare for some time now, but it has taken longer for machine learning to infuse the radiation therapy market, which has been focused on making treatment more precise in order to spare healthy tissue.

For the past two years, you couldn’t turn a corner at Chicago’s McCormick Place during RSNA without seeing or hearing those two letters but there has been a bit less focus on AI at previous American Society for Radiation Oncology (ASTRO) meetings. That changed at this year’s 61st meeting, which also took place at McCormick.

Aside from AI, a lot of discussion centered around the future of flash therapy — which targets tumors using high doses at ultra-fast speeds, potentially reducing toxicity in healthy tissue — and a continued look at how to streamline workflow for radiation oncologists.

Here are our key takeaways from the booth tours, presentations and research presented at the show.

The company promoted an AI-driven technology that's able to alter a patient's treatment plan based on the tumor and anatomical changes.

"I think we're leapfrogging anything that's out there," Toth told HCB News. "Other devices have been designed to do adaptive radiation therapy, but I think of AI in the context of aiding the physician. If I'm sitting at a console marking outlines ... it's not the best use of my time."

AI to predict outcomes
During the show, Dr. Jay Reddy, an assistant professor of radiation oncology at the University of Texas MD Anderson Cancer Center, presented a look at a computer model that was used to predict side effects associated with radiation therapy for head and neck cancer.

The researchers used the models to accurately predict the patients who would benefit from interventions to prevent side effects like significant weight loss, feeding tube placement and unplanned hospitalizations.
1(current)
2