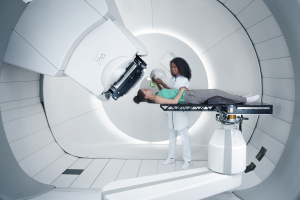 Cancer treatment is getting faster and more precise, with the future promising to usher in ultra-high, cancer-killing radiation dose in less than a second. In the here and now, manufacturers of proton therapy and conventional radiation oncology treatment systems are continuing to increase speed and precision in an effort to create the best outcomes.

Here's what's new in both proton therapy and radiation oncology.

Hitachi Proton
Treatment has begun at two proton therapy centers in Japan: the Osaka Heavy Ion Therapy Center, which began operating in October 2018, and the Nagamori Memorial Center of Innovative Cancer Therapy and Research in Kyoto, which opened for treatment in April 2019.

The site in Osaka, which has three treatment rooms, is the first heavy ion therapy center designed to be dedicated for dose-driven continuous scanning technology. It is one of only a few locations in the world to offer the advanced form of particle therapy, which uses more energy in the tumor tissue, which can be more destructive to the tumors, can treat radioresistant cells, and requires fewer treatment sessions.

The site in Kyoto includes real-time image gating motion management technology, which allows treatment of tumors during patient motion, according to the company. This technology received FDA 510(K) clearance in December 2017.

“With the addition of Mitsubishi, we have added 7 proton centers and 4 carbon centers to our user group. We are extremely happy with the progress of our synergies and hope to see more growth in the near future” said Sash Matsumoto, general manager at Hitachi America Ltd.

IBA
IBA, which has roughly 30 proton therapy systems in clinical operation around the world, is working on developing a new motion management technology that is a mix of beam management and image guidance to freeze moving targets.

“The tumor in the lung that moves as a patient is breathing — that’s what motion management will address,” said Frédéric Genin, chief product officer for proton therapy at IBA.

It is also working with a partner in Royal Oak, Michigan, to develop arc proton therapy, delivering the beam continuously as the gantry is rotating.

“In classic proton therapy you deliver the beam from two to up to four angles,” Genin said. “Arc proton therapy has three advantages. It improves the throughput of the facility, simplifies the treatment workflow and has the potential to improve clinical outcomes for specific cases.”
1(current)
2
3
4
5
6
7
8
9