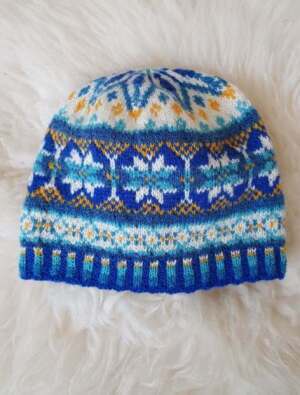 Middleton's knitted hat
A fundraising campaign to help purchase a new MR scanner for Scotland's remote Shetland Islands has gotten a boost from one of the region's oldest traditions — knitting.

A year ago, the Shetland Health Board Endowment Fund began a campaign which aims to raise nearly £1.65 million to purchase a scanner for the archipelago, which consists of 16 islands inhabited by roughly 23,000 people.

Currently, about 600 patients a year must travel via plane, or up to 14 hours over often rough seas on an overnight ferry, to either Aberdeen or Glasgow on the Scottish mainland to have an elective outpatient MR scan.

The flights are sometimes cancelled due to either high winds or the summer mist at Sumburgh Airport, the main airport in Shetland, said Colin Marsland, director of finance for the U.K. National Health Service in Shetland.

“The MRI scans on the Scottish mainland and cost of the travel for the islanders are all paid for by the NHS,” Marsland told HCB News. “However, the current activity number for elective MRI scans does not make the capital outlay of buying and installing an MRI Scanner the best use of scarce NHS capital resources. It is, however, anticipated that the staff and day-to-day general running costs of the scanner will be funded from the reduction in the off-island travel costs.”

Enter Harriet Middleton, a knitter who had to travel to Aberdeen for follow-up MR scans every three months after having a cancerous polyp removed from her colon.

Middleton, who says she has immersed herself in her beloved hobby “through good times and bad,” began selling her hand-knit items at craft shows to raise money for the campaign. She then started receiving donations of yarn from local companies, such as Jamieson's of Shetland, forming a knitting group to create more items for the fundraiser.

At the suggestion of a friend, Middleton designed a pattern for a hat using the blue and orange colors from the campaign’s logo. Her son, Billy Middleton, who works in the estates and facilities department for NHS Shetland, set up a website and social media accounts to sell and promote the pattern.

Since the beginning of May, thousands of online sales of the Harriet’s Hat pattern, along with sales of Shetland wool yarn from Lerwick retailer Jamieson & Smith and knitwear from Middleton and her knitting group, called MRI Maakers, has raised nearly £25,000, close to 10 percent of the total raised so far, toward the target.

“I was overwhelmed and still am over the response to the campaign,” Middleton told HCB News. “It shows the power of the internet. I never thought when I decided to do something to help raise money for the appeal that my small effort would generate so much interest.”

Some U.S. yarn companies, such as British yarn importer The Woolly Thistle, have even donated profits from the sales of kits for the hat to the appeal fund, showing the wide reach of this close-knit campaign, with word spreading via social media such as Twitter and Instagram.

“We’ve both been taken back by the extent of support to our efforts, and how widespread it’s been,” Billy Middleton, told HCB News. “Even now, a couple of months after the first pattern was released, it's still hard to believe Harriet's Hat is being knitted in so many countries around the world.”