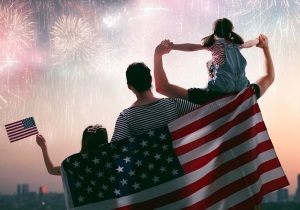 For those of us who studied history, we know that throughout the last 243 years, there has been a lot of push and pull.

Last Sunday at church, I listened while my 101 year old mother in law was speaking with one of her friends. She was from Hungary and they were talking about the best way to make stuffed peppers (my grandmother's recipe was better than either of theirs).

In any event, the conversation circled back to when the young woman, then 16 years old, came to the United States. She had been one of three daughters and one night, the secret police came to her house during the dinner hour and shot her father dead, in front of the three daughters and their mother. Then they walked out and left the mother and daughters with the responsibility of burying the father.

All because she was welcomed into our country, as a refugee.

Having said that, over the weekend, I heard Fareed Zakaria say that he believes that there is an abuse of the asylum process. He said that there is a 240 percent increase from 2014 and a backlog of more than 300 asylum cases pending. He also said that the average immigration case has been pending for 700 days.

The implication was that the asylum process is being abused.

I also think back about the prejudices that we have had against African Americans, against Italians, against the Irish and the Japanese.

I cannot help thinking that there is no simple answer to this problem and it is a mistake to try to solve the problem with a one size fits all solution.

It also seems to me that a for-profit business running these migrant centers at the border just seems wrong.

Anyway, while I don't claim to have the answers, it seems to me that we are not handling things correctly. I hope that we can turn that around and I don't believe that vilifying these people who are less fortunate than we are or trying to escape unpleasant conditions in their country, is the right answer. I also hope that there is a way that we can prevent fraud and abuse of the asylum system.

It may not seem like this is not a medical issue on the surface, but it is only a matter of time before this is a drain on healthcare as well.