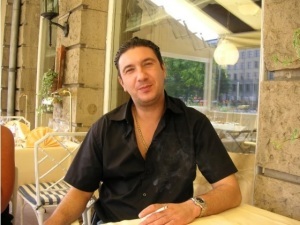 Hassan at the first IAMERS European
meeting in Dusseldorf in 2005
courtesy of Diana Upton
Hassan El Azzazi was one of the very first European independent dealers. He can trace his lineage back to Dr. Michael Friebe, who in my opinion, was the pioneer of all pioneers in the independent equipment, service & parts business.

Hassan was always fun to be with, full of energy and a real gentleman.

He was close friends with Diana Upton, the president of IAMERS who also worked for Dr. Friebe around the same time as Hassan. Actually, it was Diana who let me know about Hassan's passing.

She sent me a text when she learned about Hassan and I asked her if she would write down some of her thoughts and memories, which she has done below:


Today I learned that my dear friend and colleague Hassan El Azzazi died last night. It seems impossible to me because no one was more full of life than Hassan.

For many years Hassan and I worked together at Neuromed/Tomovation. It was Hassan who would pick me up at the Dusseldorf airport from my 6am flight from New York. Of course no one else in the company would have bothered to wake at such an hour; and who could blame them. But Hassan was always there when I came through baggage claim. Hassan took me to see belly dancers and introduced me to Egyptian food.

A couple of years ago at RSNA several of us went to dinner together. I was fortunate to sit at the same table as Hassan. We spent the dinner telling stories about our days at Tomovation. We laughed so hard people at the other tables were staring at us. In many ways it was a typical dinner with Hassan. If you were hanging out with Hassan, you were going to have a good time.

Hassan always talked with his hands, usually with a cigarette. He’d greet you by putting both hands on your shoulders and a big hug, followed by three kisses – right cheek, left cheek and back again.

I will really miss you my friend. Many in the industry will miss you. No RSNA, or trip to Germany, will ever be the same.


I was touched by Diana's words and wanted to share them. If you knew Hassan and have your own fond memories of time spent with him, I would love to hear about them.