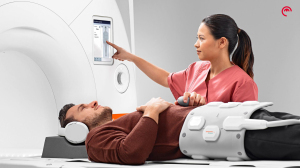 The service provides patients with MR scans that can detect up to 11 forms of cancer in men and 13 in women.

“Patients that will benefit the most from our service are those who are coming in for screening — to check their organs, as part of their annual health regimen,” Justin Melia, head of marketing at Ezra, told HCB News. “Previous cancer patients will also benefit from active screening because they are at higher risk of developing additional cancers.”

The program is divided into multiple plans to make scans more affordable and to bring in as many people as possible. The Ezra full-body scan costs $1,950, while single-region scans are available for as little as $675. In addition, members can pay in 12 monthly installments through a no-interest payment plan.

Scans are performed using 3T MR systems with curated protocols for high quality imaging. Ezra is currently seeking approval for use of its proprietary AI technology in prostate detection and segmentation, and expects it to help radiologists in lesion detection. It plans to expand its use to cancer detection in other organs following approval.

The opening of the program follows that of Ezra’s MR-based prostate cancer screening program back in January, which leverages new technologies to detect prostate cancer as early as possible so that patients can avoid unnecessary prostate biopsies. It has since attracted almost 1,000 members and scanned hundreds of men.

“Right now we cover the top cancers by incidence and ones that are very amenable to detection by MR,” said Melia. “As MR technology improves, there is certainly room to add additional cancers.”

In addition to accumulating a board of medical advisers in the last four months, Ezra has expanded to eight new imaging facilities across the five boroughs of New York and New Jersey.

It plans to expand its presence to other cities by the end of the 2019.