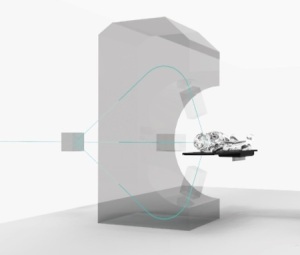 Japanese healthcare startup B dot Medical has announced plans to develop an ultra-compact proton therapy system that will fit in spaces occupied by conventional radiotherapy systems in hospitals.

The benefits of proton therapy are well documented, but the cost associated with the advanced form of treatment is often prohibitive. Conventional systems require a rotating gantry to irradiate a desired angle. Such parts are large and complex, making the systems massive and costly construction jobs requiring their own buildings.

The ultra-compact system will utilize a non-rotating gantry, which B dot said will allow for a much smaller footprint. The system will bend the proton beam without a rotation mechanism by using a superconducting magnet.

The proton therapy market reached a high level in 2015 but began to decline in mid-2016, according to a news analysis by MEDraysintell. Global investments in particle therapies (proton as well as carbon) were nearly 20 percent lower in 2018 compared to 2017 and 62 percent lower compared to 2015.

"In 2018, two proton therapy facilities filed for bankruptcy," Paul-Emmanuel Goethals, co-founder of MEDraysintell, told HCB News at the time the report was published in February, referring to Seattle Cancer Care Alliance Proton Therapy and ProCure Proton Therapy Center Oklahoma, "mainly because they were not able to attract a sufficient number of patients."

B dot Medical is a startup of the National Institutes for Quantum and Radiological Science and Technology.