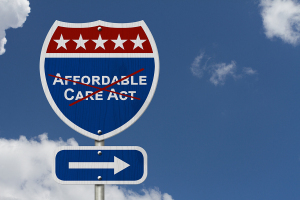 Today I read in the newspaper that President Trump wants to repeal the Affordable Care Act before we have something to replace it. Whatever view you might have of the ACA I think the prudent thing to do would be to develop a replacement before killing it.

As a business person I understand the concept of starting from scratch and coming up with a new plan that's improved or better. I get that and I understand that logic.

It seems to me that there are so many moving parts and so many interconnected policies, procedures and rules.

I have to believe healthcare providers would go crazy and wouldn't be sure what to do first or how to handle any given situation. Who would they ask? What would the rules be? Who is entitled to what coverage and where will the money come from?

Insurance companies I suspect will also be confused.

In the end even though it might be confusing and frustrating for providers and payers, I predict your rank-and-file patient will suffer the most.

Maybe it's smart to come up with a new plan but let's vet that plan in the light of day and make sure that we thought of everything. As my dad used to say when I was building a doghouse: measure twice and cut once!

I sure hope our leaders in Washington will follow that advice.