Medicare for all? I don't think so 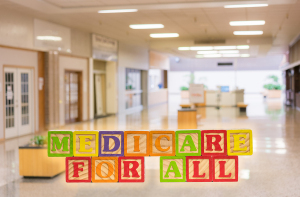 I feel that I have liberal leanings, even though I am a business man and I believe it is the responsibility of all of us to take care of each other. But I am not in favor of Medicare For All or so-called single-payer.

Many people point to England and Ireland as an example of how single-payers systems work, but I wonder how many of those people are aware of the fact that sometimes you can wait three months for an MRI in England and Ireland. However, if you have the $400, you can pay Alliance Imaging and get an MRI tomorrow.

Also, the idea of putting the government in charge of our healthcare worries me. They can't fix our roads or bridges. Our airports aren't world class anymore and the bureaucracy is really disheartening. I don't feel as though our politicians care about us at all.

Look at the VA. Veterans have to wait a long time to receive treatment and I don't think it is a secret to anyone that the VA healthcare system doesn't work very well. For anyone who wants to put the government in charge of our healthcare, I would say, prove to me that you can fix the VA and then talk to me about taking over healthcare. For the time being, you have your hands full...

And even though all of us involved in healthcare can take pride in the fact that we have saved people's lives and helped to make people live longer, we all have to agree that healthcare is a for profit business. It has to be.

In my opinion, competition is a good thing. An airport that has only one restaurant and therefore no competition, usually offers less quality food with a lower level of service. However, an airport with 30 restaurants, there is a little competition to provide better food and better quality service.

Southwest Airlines prospers because they provide efficient and friendly service at a competitive price. Competition is a good thing.

Do I have the answer for healthcare? No, I don't. But that doesn't mean that Medicare for all is the answer.

If you ask me, we should tweak the Affordable Care Act. And if we are going to offer something for everyone, my idea would be to give everyone a guaranteed annual physical at no cost.