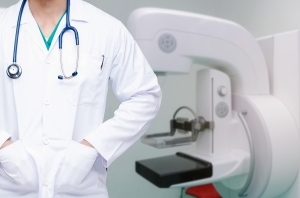 When it comes to breast cancer mammography, the “squeeze” can be so dreaded by some women that they “may not attend or reattend breast cancer screening because of the discomfort or pain,” say French researchers.

Now findings from their new randomized study of 548 women have found that letting women control their own compression is “non-inferior to the standard compression approach in achieving minimal breast thickness,” Dr. Philippe Henrot of the Department of Radiology, Institut de Cancérologie de Lorraine Alexis Vautrin in Vandœuvre-lès-Nancy, and colleagues reported in JAMA Internal Medicine online.

In fact, the researchers found that the group of self-compressors used a higher force, without experiencing increased pain, than those receiving standard compression – and without compromising image quality.

For the study, the margin of non-inferiority to compare standard and self-compression was defined as a mean of 3 mm of thickness of 4 views. The trial found that, “the difference in the mean thickness between the 2 arms was lower than the non-inferiority margin.”

The researchers concluded that self-compression “may be an effective option for women who want to be involved in their breast examination.”

They did note that in the study the extra time needed for workers to explain to the women how to use the equipment was not measured, and that this could possibly be an issue in some facilities.

That said, the approach is promising for several reasons, Dr. Deborah Korenstein of Memorial Sloan Kettering Cancer Center and Weill Cornell Medical College in New York City, who was not part of the study, told Reuters.

“The benefit of letting women do it themselves is twofold: the main concept is that it will result in a less painful test, which will prevent women from avoiding future mammograms because of fear of discomfort,” she advised. In addition, she noted that, “it is also possible that women will actually tolerate more compression if they can control it themselves, which would lead to better quality images,” although she pointed out that this was not shown in the present study.

In January, the importance of making it easier to get screening for breast cancer was highlighted by a study that showed that women in coastal cities, where income levels and insurance access are higher, have better odds of getting the procedure, and thus, catching their breast cancer early.

"It has been shown that screening mammography use is generally higher in urban areas in comparison with rural areas, and so prior studies have focused on these rural disparities in screening," Dr. Eric Kim, PGY-4 diagnostic radiology resident in the Department of Radiology at NYU Langone Health, told HCB News. "This study focuses on the urban disparities in screening mammography utilization by analyzing multiple variables expected to impact screening use in the 500 largest cities of the United States."

The second leading cause of death in the U.S., breast cancer mortality has been shown to decrease with the rise of mammographic screening.