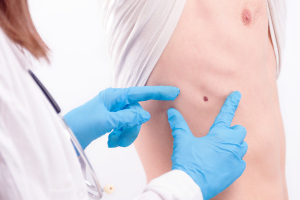 “Melanoma has a poor prognosis,” Zhen Cheng of Stanford University, told HCB News. “Development of specific PET probes to both detect melanoma at its earliest stages and to detect the metastasis of melanoma is critical for improving the survival of patients with malignant melanoma.”

The American Cancer Society estimates that about 96,480 new cases of melanoma will be diagnosed this year. Approximately 7,230 people are expected to die of the disease.

The new 18F-P3BZA tracer targets melanin pigment. It is present in most melanoma lesions and has been shown to shorten overall survival and disease-free survival in patients with metastatic melanoma.

Previous studies have investigated melanin-targeted PET tracers in small animal models, but this is the first time it was tested on humans. This new research demonstrated that 18F-P3BZA is safe and “highly promising” for the clinical diagnosis and staging of melanoma.

The current gold standard for imaging melanoma is 18F-FDG, but it comes with some limitations. It’s not sensitive enough to detect primary melanoma or stage I and II melanomas and it’s a non-specific PET probe that shows accumulations in different tumors from inflamed tissues.

For the new study, the team injected six healthy individuals with 18F-P3BZA and had them undergo whole-body PET/CT scans. They also conducted blood tests at the 10-minute, one-hour, two-hour and four-hour post-injection mark to assess biodistribution, pharmacokinetic and radiation dosimetry.

In addition, five patients with suspected melanomas underwent 18F-P3BZA PET/CT imaging 10 minutes and one hour after injection. All of the study participants also received 18F-FDG PET/CT scans on the third day.

“18F-P3BZA shows selective and rapid uptake in melanoma and metastases, along with a favorable whole-body distribution pattern in vivo,” said Cheng. “It is a highly promising probe that could become a standard for detecting primary and metastatic melanoma.”

But in order for that to happen, the tracer needs to be further evaluated in a large number of patients with primary or metastatic melanoma at multiple research centers.