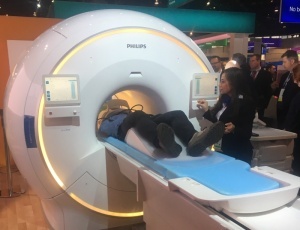 Royal Philips graced the floors of 2018’s RSNA this week in Chicago with demos of its Ingenia Ambition 1.5T MR S and X systems.

Equipped with Philips’ BlueSeal fully-sealed magnet, the solution is the only MR scanner capable of performing helium-free operations, decreasing chances for potentially long and expensive disruptions, and virtually eradicating the risks associated with the unpredictable supply of the costly element.

“Normally, there’s 1500 to 2000 liters," said Martijn Hartjes, head of MR product marketing for global marketing BIU MR at Philips. We've reduced that amount by 99.5 percent so now there’s only seven liters. It’s completely sealed so it cannot come out. It gets shipped from the factory with helium in it and that’s it. The customer never has to worry about helium anymore.”

The BlueSeal magnet enables the system to operate with less than half a percent of the amount of liquid helium found in conventional scanners. It requires no vent pipe, making Ingenia Ambition 900 kilograms lighter than its predecessor, the Ingenia 1.5T ZBO magnet, as well as less costly to construct and less challenging for siting compared to conventional magnets.

Should an object become stuck in the bore, users can turn off the BlueSeal’s magnetic field using the EasySwitch solution, one of many components integrated within the system. The magnet can then undergo a controlled ramp-down, completed either through remote support by an engineer or by a trained, on-site one.

“Within 30 minutes, the magnet can be run down and the item can be taken out of the bore," he said. "Within a day, the system can pick up and run again.”

The S version of the system is the lower cost one, and is more applicable for routine scans, such as in neuro, spinal and MSK procedures.

The X version carries a higher rating specification and is more suitable for exams in cardiology, breast imaging and oncology, among other areas. Its ability to provide greater quality imagery is due to additional features not found on the S, including the SmartExam analytics solution which leverages AI to automatically plan the exam, scan and process data, and VitalEye technology for detecting patient physiology and breathing movement.

In addition, both versions are equipped with Compressed SENSE, an advanced acceleration application that reduces exam times by up to 50 percent across all anatomies for 2D and 3D by extracting signs of breathing using algorithms. This enables technicians to set up a routine procedure in less than a minute and helps providers save in the total amount spent on the system throughout its lifespan.

“With BlueSeal, when they look at the total cost of ownership for a customer buying this versus a competitor system or one of our previous systems, we find that in overtime they save a huge amount of cost because of the helium-free magnets, technology and CompressSENSE," said Hartjes.

The solution was launched in September of this year, with its first installation completed at Spital Uster Hospital, a large provider of extended primary healthcare in Zurich, Switzerland. Installations are currently taking place in the U.S.

It is CE-marked and FDA-cleared.