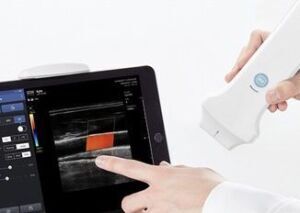 With the recent FDA approval of Healcerion’s SONON 300L, healthcare facilities now have access to an ultrasound that is less than a tenth the cost of conventional systems.

“By innovating to simplify and focusing on optimizing procedures already performed by most medical practitioners, we were able to reduce the device’s cost dramatically,” John Park, CMO of Healcerion, told HCB News.

In addition to simplifying the design, size and user interface of the device, the company did not incorporate the hardware and electronic controls found in conventional systems.

The SONON 300L leverages a tablet or smartphone — similar to Philips Healthcare’s Lumify. However, this device is unique in that it is wireless and connects to Wi-Fi.

“When a physician does an injection using ultrasound, it isn’t practical for them to hold the ultrasound image display simultaneously when it is connected through wires,” said Park.

In addition, in sterile areas such as the operating room, the wires must be covered and that could prevent the practitioner from conducting an efficient and thorough exam.

A study from February published in The Journal of Family Practice, found that less than 10 percent of primary care providers in the U.S. use ultrasound for diagnostic use. Since the SONON 300L is smaller and easier to use than conventional systems, Healcerion believes PCPs may start using it to assess thyroid, carotid, breast, lung and vascular conditions.

“Because the idea of SONON 300L came from a desire to help reduce the worldwide healthcare imbalance, all of our technology has been developed to meet the needs of those with the least resources, while utilizing the best technology available,” said Park.

Imaging utilization to drop more than 50% over three or four months: report