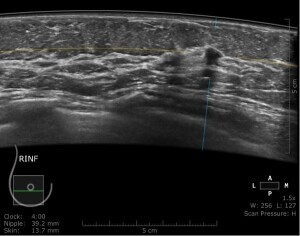 From the July 2018 issue of HealthCare Business News magazine

At Imaging for Women, we recently saw a woman in her 50s who had been getting annual mammograms since the age of 40 – all with normal results. However, at this appointment, we informed her of something she had not been told before: She was among the forty percent of women who have dense breast tissue.

There’s often a misconception among patients and referring physicians that breast density can be assessed based on appearance or with a physical exam. Rather, breast density is a radiographic measurement of the amount of fatty tissue versus fibrous tissue in the breast. The more fibrous tissue there is, the denser the breast and the whiter it will look on a mammogram. Both cancer and dense tissue appear white on a mammogram, so for radiologists, looking for tumors in women with dense breasts on a mammogram can be like looking for a snowball in a snowstorm.

Radiologists score breast density as one of four levels ranging from “almost entirely fatty” to “extremely dense”. As breast density increases, the ability to find cancers hiding in the fibrous tissue decreases. For women with dense breast tissue such as this patient, we recommend a supplemental screening with automated breast ultrasound (ABUS) to help ensure we are not missing anything. With ultrasound, the tissue displays as white, while tumors appear gray, making cancers easier to spot.

This patient’s ultrasound revealed a small mass in her breast. It was enveloped in dense tissue. Fortunately, the cancer was detected early, and the patient is doing well today.

Every year, more than 39 million women in the United States receive an annual screening mammogram, and approximately forty percent of them have heterogeneously dense or extremely dense breast tissue. Even with state density inform laws, there is a knowledge gap with referring physicians and patients about the comprehensive problem of dense breast tissue. High breast density is not only a radiologic problem, but it is also the leading common risk factor for developing breast cancer. This unfortunate one-two punch means that not only are women with dense breasts more likely to develop cancer, but radiologists are less likely to find it on a mammogram.

Our practice philosophy is to employ a comprehensive 3D imaging approach. We use 3D tomosynthesis as the primary exam for all patients. It can detect one to two more cancers per thousand women in the general population. Tomosynthesis also reduces the number of women called back for diagnostic imaging, as radiologists are better able to distinguish benign findings on a screening mammogram. After a screening mammogram, our current options for supplemental screening include 3D tomosynthesis mammography, whole breast screening ultrasound, which uses sound waves, or for high-risk patients, contrast-enhanced screening MR.
1(current)
2