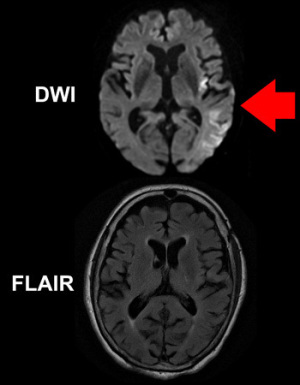 The mismatch between the two
images implies the patient was imaged within
4.5 hours of symptom onset.
Courtesy of Ona Wu
For up to 25 percent of stroke patients, their early symptoms go unnoticed, and that often prevents them from receiving tPA treatment. But researchers at MGH may have found a way around that.

“So many patients don't qualify for treatment because they arrive too late and this might be something we can change in the future,” Dr. Lee Schwamm, co-lead and corresponding author of the study, told HCB News.

Schwamm and her team recruited 80 patients with ischemic stroke that imaging confirmed was unwitnessed at its onset. It was less than 24 hours since they were last known to be well.

Study eligibility was determined by a mismatch between two types of MR imaging studies — FLAIR, which typically only shows stroke effects on brain tissue after several hours of reduced blood flow, and the diffusion-weight imaging (DWI) technique that is very sensitive to changes beginning in the first minutes or hours after stroke onset.

Ona Wu, the co-lead author, explained that brain tissue that is abnormal on DWI but not yet abnormal on FLAIR has been seen in patients that were four hours or less after known symptom onset. That shows the evolution of tissue as the stroke progresses in the first few hours.

The team used that pattern to select patients for tPA treatment and called the method quantitative DWI FLAIR Mismatch (qDFM). The selected patients were likely to be similar to patients with known symptom onset who benefited from tPA because their strokes had not yet caused irreversible injury.

“We hope that a large randomized study of [patients who meet] these criteria will be performed to see if this treatment can be effective for patients who present with wake-up stroke,” said Schwamm.

The team also hopes to conduct a follow-up, placebo-controlled trial that will compare MR with CT imaging for identifying patients with unwitnessed strokes who could safely and effectively be treated with tPA.