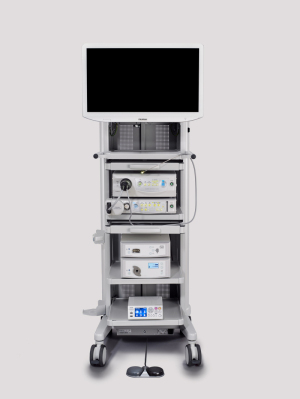 “We have the unique advantage of drawing on Fujifilm's core technologies and expertise gained over many years in those diverse areas of healthcare,” Stephen Mariano, vice president and general manager of Fujifilm New Development, told HCB News. “For that reason, Fujifilm is well positioned to bring innovations to the minimally-invasive surgical device industry.”

"Clinicians who have utilized Fujifilm's Ultra-Slim Video Laparoscope System have remarked that our technology has the potential to push the boundaries of minimally invasive surgery as we know them today, and improve the ways these surgeries are performed in the future,” said Mariano.

Dr. Paul G. Curcillo II of Fox Chase Cancer Center in Philadelphia believes this technology has the potential to enable him to perform reduced port surgery. Traditional multiport laparoscopy relies on several access points, but reduced port surgery can be performed with as few as one.

For example, the technology’s ultra-slim line design allows smaller incisions to be made. In addition, the ergonomic handle has made handling the instrument easier, and has lessened muscle fatigue among surgeons at Fox Chase Cancer Center.