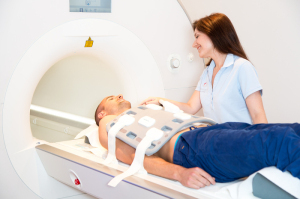 May also be useful
for cancer patients
Patients may no longer have to hold their breath during cardiac MR exams thanks to a new imaging technique developed by researchers at Cedars-Sinai.

“MR imaging of heart has always been plagued by long and complicated scans, particularly for quantitative imaging, and by image artifacts caused by motion,” Debiao Li, director of the Cedars-Sinai Biomedical Imaging Research Institute, and Anthony G. Christodoulou, scientist at the institute, told HCB News in an email. “We think the medical community will welcome any solution that opens up quantitative MR to sicker patients who can't hold their breath or who have cardiac arrhythmias.”

The MR multitasking technique continuously acquires image data and then separates out the overlapping sources of motion and other changes into multiple time dimensions. It essentially generates a 6-D video that can be played back in four different ways — cardiac motion, respiratory motion and two tissue processes that reveal cardiac health.

The standard method that has patients hold their breath while images are being taken has to be timed precisely to a specific part of a heartbeat. That’s often difficult for patients, especially those who have irregular heartbeats or breathing problems.

Li, Christodoulou and the rest of their team tested the MR Multitasking technique with 10 healthy participants and 10 cardiac patients. They found that it was accurate, more comfortable and allowed them to conduct three cardiac MR exams in only 90 seconds.

“The ideas behind multitasking open the door to performing multiple tests at once, in a way that is easier for the patient and for the technologist operating the scanner,” wrote Li and Christodoulou. “If we can rebuild the standard MR exam around these ideas, we could pack an entire exam into a quick, inexpensive scan with the push of a button.”

They added that with further optimization and validation as well as fast image reconstruction enabled by new computational advances, they think this technique could eventually become the standard for cardiac MR imaging. They are also looking to expand it to patients with other diseases like cancer.