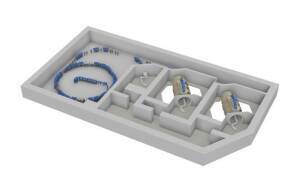 There are several heavy-ion facilities in Japan, but this is Toshiba ESS’ first overseas contract.

“Heavy-ion therapy, known as the most advanced cancer treatment in the world, will deliver the promise of patient-centered care in an era of incurable cancer and super-aging society,” Do-Heum Yoon, president and CEO of YUHS, said in a statement.

This type of therapy uses carbon ion particles to generate a high-energy beam that irradiates cancerous tissue. It’s capable of accelerating the carbon ion beam up to 70 percent the speed of light and delivers a concentrated dose of radiation to the target area.

YUHS’ system, which will be ready for treatment in 2022, is equipped with one horizontally-fixed beam treatment room and two rotating gantry treatment rooms. It also features Toshiba’s high-speed scanning irradiation devices and superconducting magnets.

YUHS was founded in 1885 and is Korea’s first modernized hospital. It has more than 9,000 outpatients, and the radiation oncology department within the Yonsei Cancer Center treats over 350 patients per day.

“Through the introduction of Toshiba’s heavy-ion therapy system, YUHS hopes to bring breakthrough innovations in cancer therapy as we did when we opened the nation’s first cancer center more than five decades ago,” said Yoon.

For decades, Toshiba ESS had been working with the National Institute for Quantum and Radiological Science and Technology on developing heavy-ion therapy systems. It has made contributions to the facilities in Japan, which leverage advanced technologies like quick-and-accurate patient positioning, 3-D high-speed scanning irradiation, respiratory gating and rotating gantry.