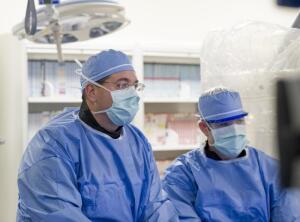 Dr. Raymond D. Turner (left)
is the principal investigator of the study
A recent study found that a new device for emergency medical personnel is 92 percent accurate at detecting the severity of a stroke.

The standard physical exam, on the other hand, is only 40 to 89 percent accurate.

The Cerebrotech Visor is a volumetric impedance phase-shift spectroscopy device. It sends low-energy radio waves through the brain and detects the change in frequency as the waves pass through fluids.

If a patient is suffering a severe stroke, the brain’s fluid will change and the radio waves will be asymmetrical. The greater the asymmetry, the more severe the stroke.

If a patient with an emergent large-vessel occlusion doesn’t receive endovascular therapy within 24 hours, the chance of a positive outcome lessens by about 20 percent each hour that passes.

"Transfer between hospitals takes a lot of time," Dr. Raymond D. Turner of the Medical University of South Carolina, said in a statement. "If we can give the information to emergency personnel out in the field that this is a large-vessel occlusion, that should change their thought process in triage as to which hospital they go to.”

For the study, the Cerebrotech Visor was deployed to emergency medical personnel in regions served by five Comprehensive Stroke Centers capable of performing endovascular therapy for severe stroke.

Both healthy and suspected stroke patients were evaluated using the device. Three readings were taken and averaged, which took about 30 seconds, and the patients were also later evaluated with neuroimaging to provide a definitive diagnosis.

Turner and his team found that compared to the neurologists’ diagnoses, the device was 92 percent accurate at differentiating patients with severe stroke and those with mild stroke or healthy participants.

The team has plans to investigate whether the device can use complex machine learning algorithms to teach itself how to distinguish a minor from a severe stroke without the assistance of a neurologist. That study will be called VITAL 2.0.

If the results are promising, the device could have widespread clinical implications in helping emergency personnel determine if a patient should be taken to a comprehensive stroke cancer or a primary stroke center.

How to recognize when your trauma center is in jeopardy