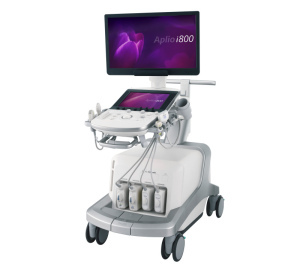 “Nonalcoholic fatty liver disease (NAFLD) and nonalcoholic steatohepatitis (NASH) are the fastest growing forms of liver disease and the scary thing is that people don’t even know they have a problem,” Dan Skyba, director of the ultrasound business unit at Canon, told HCB News. “It’s correlated with the rise of obesity in the U.S. and it’s particularly affecting children.”

Skyba described Shear Wave Dispersion as an offshoot of shear wave elastography. As the wave travels through the liver, the tool measures how much it spreads in order to determine the fattiness of the liver.

“The tool allows us to identify that and potentially put a number on it,” said Skyba. “We are giving clinicians not only a visual display of information, but also quantitative information.”

For years radiologists have been limited in their ability to penetrate the depth of the liver with ultrasound. Factors such as liver inflammation, fluid accumulation in the liver cells and the patient’s BMI result in signal decay of the ultrasound beam.

“They see this in the pictures, but they had no way of putting a number on it, said Skyba. “Now they have a tool to put a number on the attenuation signal on the ultrasound beam.”

The FDA also recently cleared a wide range of transducers for the Aplio i-series platform. That includes a 22 MHz hockey stick to visualize small and narrow areas like fingers and joints or for interoperative procedures, as well as several transducers for abdominal 3-D, OB 4-D, neonatal and vascular imaging.