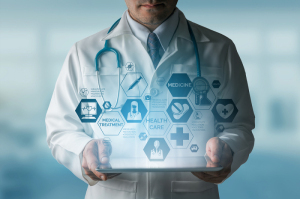 From the April 2018 issue of HealthCare Business News magazine

Dr. Nick van Terheyden is well-known in the realm of healthcare technology. He is a former Chief Medical Officer for Dell, an in-demand speaker, a popular blogger, author and a physician. He has also contributed articles to HealthCare Business News in the past. With all that said, it’s always great to catch up with him to get his take on a variety of topics. In this case, we spoke at length about the ongoing evolution of virtual care and what it means for hospitals, physicians, patients and the financial wellbeing of all.

In van Terheyden’s opinion, virtual care has advanced in recent years, but it still has a long way to go to reach its true potential and the process has been slow. “I wrote an article 15 or 20 years ago saying speech recognition has been two years away for the last 10 years and it’s still two years away. It’s not true with speech recognition anymore, but certainly with virtual care, there’s been a long promise of it. I talked with someone deeply invested in it. They had a similar precept that ‘this is the year’ and we’ve been hearing that for a long time,” he said.

The challenge initially, according to van Terheyden, was creating the technology that could deliver the experience at the level it’s needed. “Because of the lack of bandwidth, the capabilities of the technology, was really rather limited. I’ve seen visionary pieces that date back to the ‘50s even that made sense, but the architecture wasn’t there. We were waiting for the technology. I think the technology is unquestionably here today and capable,” he said.

“I would say I practiced telemedicine with my mother for years. And what was telemedicine? Well, that was Facetime, it was Skype, it was whatever the visual interaction was. And it wasn’t official telecare to be clear, it was with my mother, but I’m a physician and it she ultimately a patient as well and I can’t switch off that interaction even though it’s a family member. And I would do everything that’s typically done in a virtual care visit, which is observe, interact, look at what’s going on in the surroundings.”

Decades have passed from the visionary pieces of the ‘50s and it’s been slow going, but a more recent snapshot (or selfie?) shows the evolution occurring much more quickly now. Consider that the iPhone just celebrated its decennial in September of last year and you’ll get a better understanding of just how fast things have moved. “It was shortly thereafter that we started to see the visual interaction. The front-facing camera and then Facetime,” van Terheyden said.

So the technology moved forward and hit its stride, but the regulatory hurdle was still ahead. Partly, in van Terheyden’s opinion, it was a matter of protectionism. For instance, he saw little professional rational why a doctor in New Jersey couldn’t treat a patient visiting Colorado in cases where the technology can support the interaction at the proper level. “The medicine I practice in New Jersey is not different to that in Colorado,” he said.
1(current)
2