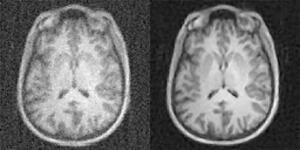 “Unlike many of the other burgeoning applications of AI in the medical image space that seek to automate many of the tasks performed by radiologists, such as image classification and diagnosis, AUTOMAP is a new tool that processes the raw data from the scanner in a new way, producing more accurate and higher quality images, which are then read by a radiologist,” Matt Rosen, senior author of a paper published in Nature describing the technique, told HCB News.

The standard image reconstruction method leverages a chain of handcrafted signal processing modules that require manual parameter tuning. The drawback is that it’s often unable to handle imperfections in the raw data.

Because of its fast processing speed, AUTOMAP could help clinicians make real-time decisions about imaging protocols while the patient is still in the scanner. That could avoid the need for repeat scans.

Rosen and his team plan to introduce AUTOMAP to the clinical space in the near future. He believes that the medical community is ready for an AI technique like this.

“We believe that radiologists themselves will drive the implementation of this work, as they will see the immediate benefit ‘on the ground’, improving their ability to make clinical diagnoses,” he said.

He did note that there could be technical challenges in the initial phases of clinical adoption, specifically surrounding IT infrastructure. Scanners typically acquire and reconstruct data directly on the scanner platform, and generally don’t archive the raw data.

“AUTOMAP operates directly on the raw data, and given the size of some of these data sets (100s of GB or more), networking and data center upgrades may be needed to accommodate the fast transfer and storage of this data,” said Rosen.