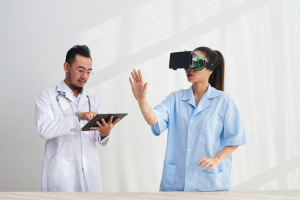 Dr. Zlatko Devcic, interventional radiology fellow at Stanford University Medicine, explained that treating this condition can be a challenge because of the intricate anatomy and differences in each case.

“If someone has a better idea of what the anatomy looks like, then they can go into the procedure picking the right equipment to accomplish whatever they need to do,” he told HCB News.

The VR technology transforms a patient’s pre-procedural CT scans into 3-D images that the radiologist can virtually manipulate while wearing special glasses. That provides them with a better understanding of spatial relationships between aneurysms and the surrounding arteries.

For the study, three radiologists used VR and a standard visualization software to independently assess 17 splenic artery aneurysms in 14 patients. Devcic and his team then measured the radiologists’ accuracy in identifying arteries associated with the aneurysms using each method.

They found that accuracy was similar with both methods but confidence was higher with VR — 93 percent of radiologists who used VR reported higher confidence in their abilities.

“If they have a better idea of what they are doing, hopefully, the procedure will take less time,” said Devcic. “If there is less procedure time involved then there will be less radiation involved as well, to the patient and the operator.”

The team hasn’t proven those benefits yet, but they plan to investigate it in future studies.