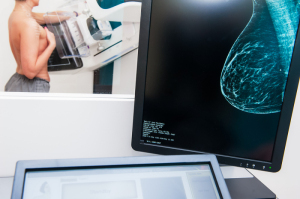 Findings to help clinicians and patients
assess pros and cons
A study to be presented at the American Roentgen Ray Society annual meeting at the end of April supports screening mammography starting at age 40.

Irshad and his team evaluated over 41,000 screening mammography exams in the areas of callbacks and recall rates, biopsies performed, cancers detected and sensitivity and specificity. The three age groups studied were 40-49, 50-59 and 60-69.

The study results showed that there was a larger number of callbacks among women age 40-49 compared to those in the 50-59 and 60-69 age groups. The 40-49 group also had a lower positive biopsy rate compared with women over 50.

However, there was no significant difference in the number of cancers detected in the three groups.

“The purpose of the study is to show that a large number of additional breast cancers can be picked up by starting screening at age 40 at a smaller expense of additional testing and biopsies,” said Irshad. “The study will help clinicians and patients to assess pros and cons of starting early screening.”