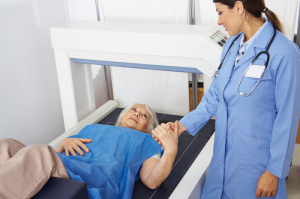 Bone density scans aren’t only useful for determining a patient’s risk of fracture — they may also identify their risk of cardiovascular disease.

Those were the findings of a new study conducted by a team of researchers from Hebrew SeniorLife's Institute for Aging Research, University of Western Australia, University of Sydney, and Edith Cowan University.

“We hope that our findings will motivate physicians who perform the bone density scans to also report the degree of vascular calcification to referring physicians so that this could be used to help in the assessment of cardiovascular risk,” Dr. Douglas P. Kiel, director of the Musculoskeletal Research Center at Hebrew SeniorLife’s Institute for Aging, told HCB News.

Kiel and the rest of the team studied the bone density scans of more than 1,000 older women in Australia for the presence of calcium deposits in the aorta. They used scans performed for osteoporosis screening to rank the severity of the calcium deposits, and then followed the women for almost 15 years to quantify the occurrence of cardiovascular disease.