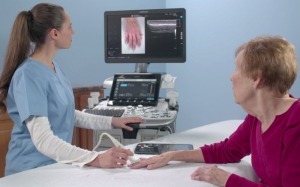 cSound Architecture, the same technology that powers driver-less cars, is built into the ultrasound platform and acquires and reconstructs data similarly to an MR or CT system.

It enables 48 times the data throughput and ten times the processing power of previous systems. This does away with the need for focal zones because the whole image is always the focus throughout the exam.

“This improved spatial and contrast resolution with every pixel in focus enables increased uniformity in clinical images at higher frame rates, and allows clinicians to be able to make confident diagnoses quickly,” said McEathron.

The LOGIQ E10 features GE’s new Photo Assistant App, which allows users to take a photo of relevant anatomy and send to the radiologist along with context and documentation.

It also features the remote clinical application that allows radiologists to manipulate the ultrasound settings with a remote control on their tablet or smartphone. They can also see how the system is being used via a web-based secure portal.

Oslo University Hospital, Rikshospitalet in Norway is already using LOGIQ E10 in clinical practice. The department of radiology performs an average of 30 ultrasound exams per day and more than 1,000 ultrasound-guided interventional procedures each year.

Dr. Knut Brabrand, head of ultrasound at the department, stated that the LOGIQ E10 helped him spot tiny lesions in the liver that he was unable to see with previous technology.

“We have delighted a number of our radiology partners who have participated in the clinical trials to develop the LOGIQ E10 and are also getting very positive reviews from the early screenings of this product,” said McEathron.