Computerized tissue imaging may predict who will benefit from chemotherapy

Computerized tissue imaging may predict who will benefit from chemotherapy 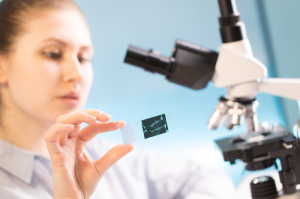 NCI-funded trial to investigate this
A computerized tissue imaging technology in development may help oncologists determine which cancer patients will benefit from aggressive post-surgery chemotherapy.

It’s important to avoid administering chemotherapy to patients who are unlikely to benefit from it because it can cause adverse side effects and can cost up to $35,000 per patient.

“If the patients are identified as not needing the additional chemotherapy, that is good news for the patient, since it suggests that they have less aggressive disease and will have a favorable response based on surgery alone,” Anant Madabhushi, one of the developers and faculty at Case Western, told HCB News.

The technology will perform a detailed computational analysis of the surgical tissue images and identify unique features associated with nuclear morphology and architecture of the disease. That will enable the oncologists to differentiate between more and less aggressive early-stage lung cancer.

That approach is only made possible because of digital images of tissue biopsies. Historically, hospitals and labs have been hesitant to provide tissue samples because testing them would usually destroy them.

Since almost every oncologist captures images of tissue samples now, this technology could be accessible to patients around the world. It would be especially useful in areas where MR and other image tests are not easily available.

The National Cancer Institute recently awarded Madabhushi and his team with a $3.16 million grant to propel this project. They plan to use those funds to conduct clinical trials to prove that the technology can predict whether or not a patient will respond to chemotherapy.

The team also plans to prove that the technology can determine which patients will reap added benefits from adjuvant chemotherapy.

“'In all patients getting chemotherapy, can we predict who will or will not respond?' is a different question, and one we are addressing in later stage lung cancers,” said Madabhushi. “This is also extremely relevant since we wish to identify early which patients will not respond to chemotherapy, since these patients could potentially then be candidates for immunotherapy.”

His team has been working extensively on using this technology to identify patients’ response to other therapies, such as radiation therapy and immunotherapy. They have begun to investigate its usefulness for brain, breast and rectal cancers as well.