How is XR-29 impacting hospitals and their CT service agreements?

How is XR-29 impacting hospitals and their CT service agreements? 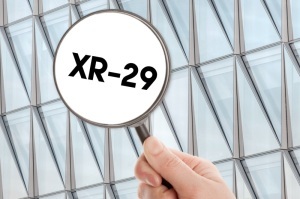 From the August 2017 issue of HealthCare Business News magazine

After years of planning and preparation, XR-29 is in full swing and impacting hospital revenue through CT reimbursement.

For many imaging providers and their service partners, the standard just means ‘business as usual’ because they were already utilizing compliant scanners or have become compliant through free software upgrades. For others, challenging questions regarding capital equipment investments, third-party software purchases and carefully calculated risk assessment are being asked, and the answers vary from one facility to the next.

XR-29 is intended to ensure providers are adequately monitoring patient exposure to radiation and takes aim at hospitals using outdated systems, incentivizing them to upgrade.

The standard’s origins can be traced back about 10 years, to a time when a few tragic cases of dose overexposure stemming from CT negligence drew major headlines and heightening public concern. A few years later, the Medical Imaging & Technology Alliance (MITA), a division of the National Electrical Manufacturers Association (NEMA), unveiled its CT dose standard, NEMA XR-29, as a way to ensure imaging providers met minimum requirements for safe scanning.

XR-29 calls for CT scanners to have four features, without which Medicare reimbursement would be reduced 5 percent in 2016 and 15 percent from 2017 onward (but only on specific scans performed in imaging centers, physician offices and hospital outpatient settings):

• Automatic exposure control (AEC) to access radiation dose in real time.
• Built-in adult and pediatric protocols for the operator to choose from.
• MITA Dose Check for automatic notification of when scan settings are likely to exceed dose thresholds.
• DICOM SR (Structured Reporting) to incorporate dose history into the patient record.

It warrants mentioning that no part of XR-29 mandates facilities show evidence of utilizing these features. The standard currently only requires that they be present on the system.

According to MITA, roughly one-third of installed systems were likely to be noncompliant with XR-29. These would be older systems, and therefore, equipment primarily serviced independently instead of by the OEM.

Who is in charge of determining compliance?
Last year, MITA pointed out ambiguities in the XR-29 certification process to CMS. In a letter, Peter Weems, MITA’s director of policy and strategy, described a meeting of stakeholders at the 2015 RSNA conference, who were “deeply concerned with regard to acceptable documentation of compliance” and asked CMS to clarify how certificates would be issued.
1(current)
2
3