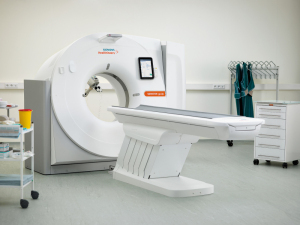 The new scanners — the SOMATOM go.Now and SOMATOM go.Up — offer scanner workflow controlled via tablet and an extended service plan included in the price of the system.

“We listened to the customer, we learned what they need and developed a tailored platform,” Eberhard ten Weges, vice president of global sales for computed tomography at Siemens Healthineers, told HCB News.

The tablet allows radiographers to prepare the scan while remaining with the patient, instead of moving between the scanner and control room, which Weges said makes the experience more pleasant for patients, particularly children.

If the radiographer needs to leave the patient’s side, a camera records their movements and the video can be viewed on the tablet. Table movement and the ability to start and stop the scan is controlled via a Bluetooth-enabled remote control.

“Imagine that you have a small child,” Theodorakis said. “Traditionally, what you would do, and what is happening nowadays, is that you are doing everything in a different room. So, the child is left on its own, relying only on the guidance that it gets from the speakers. Imagine that now everything is done close to the patient. So while you are configuring the protocols, while you are setting the parameters, while you are doing literally everything, you are close to the child. This, we think, will have a major impact on the patient experience.”

The setup allows for flexibility in setting up the equipment, company officials said, as the scanners can be installed in a single room, with a shielded area to protect staff from radiation exposure.

The company is also keeping budgets in mind with the new release. In addition to the one-year warranty for the SOMATOM go.Now and SOMATOM go.Up, Siemens is including an additional two-year service plan, covering several replacement parts, as well as user training. The new Chronon X-ray tube was designed with a longer lifespan, and the scanners require preventative maintenance only every three years, instead of twice a year, according to the company.

The SOMATOM go.Now and SOMATOM go.Up are not yet available in the U.S., pending 510(k) clearance.