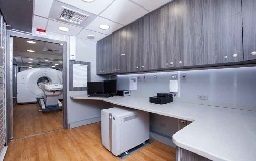 As hospitals look to update and replace older equipment and expand imaging programs while facing budget pressures, mobile imaging solutions have filled the gap, and companies that provide these solutions see a market that continues to expand. Like many industries, the mobile imaging market took a slight hit after the 2008 financial crisis, says Mark Koers, an account executive at Modular Devices Inc., but the market for mobile medical labs has expanded in recent years.

“Hospitals have been updating and replacing older equipment and we’ve seen imaging program startups and expansions begin to pick up,” Koers says. Bob Bachman, president of Advanced Mobility by Kentucky Trailer, says aging equipment is a big driver of market expansion. “The existing fleet is old and getting older,” Bachman says. “The average age, 15 to 20 years old, has never been higher.” The mobile CT business is also growing, in large part, because of the XR-29 legislation, Bachman says.

Mobile imaging, and sharing mobile devices among several facilities, is a growing trend particularly in rural areas, says Beth Schmidt, director of marketing for DMS Health Technologies, which has been working with the Veterans Administration and Indian Health Service to facilitate getting clinics into rural areas. “Many patients who live far off the grid don’t come into a hospital until their symptoms become unbearable,” Schmidt says. “Positive medical outcomes are statistically much better when an illness can be treated early in its progression.”

Smaller investment
Mobile imaging is a budget-saving option for hospitals that are unable to invest in expensive new equipment. The market is being driven by continuing reimbursement reduction pressures and hospital consolidations, those in the industry say. “Some hospitals don’t have the patient volume necessary to justify the cost of in-house imaging equipment, or access to the capital necessary to purchase the equipment up front,” Hockel says. “So having a mobile solution enables the hospital to bring quality, short- or long-term, cost-effective and convenient imaging solutions to their patients that would not be possible otherwise.”
1(current)
2
3
4

Mobile imaging market looks back on an energized year