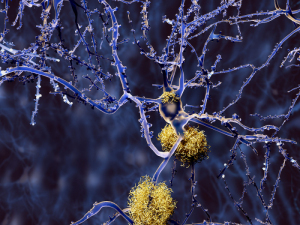 Neurons with amyloid plaques
Focused ultrasound has already been shown to reduce Alzheimer's symptoms, but researchers from the University of Queensland in Australia have published findings in PloS One suggesting it may also slow aging in healthy brains.

In the brain, the structure of neuronal cells in the hippocampus, which is important for learning and memory, reduces with age. The researchers found that treating mice with focused ultrasound prevents that reduction.

They are now conducting experiments to see if this preservation of the brain cell structure will lessen the reductions in learning and memory that happen with age.

In the next stage of research, the University of Queensland researchers will investigate the effect of focused ultrasound on the brain structure and function of older mice.

The university has already discovered in previous research that focused ultrasound can break apart the neurotoxic amyloid plaques that cause memory loss and cognitive decline in Alzheimer's. That study was published in the journal, Science Translational Medicine.

Sunnybrook Research Institute in Toronto found similar results in a study that was published in February 2015. They used a microbubble contrast agent with focused ultrasound and temporarily created an opening in the blood-brain barrier for drugs to enter.

The mice with increased plaque on their hippocampus experienced improvements in cognition and spatial learning and both that group and the control group benefited from improved neuronal plasticity.

“Collectively, this research is fundamentally changing our understanding of not only how to treat Alzheimer’s, but that interventions such as ultrasound scanning can prevent the detrimental effects of aging,” Dr. Robert Hatch, senior author of the study, said in a statement.