Brain MR can help detect cognitive disorders without clear cause 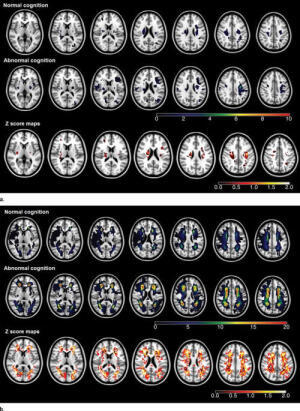 Photo courtesy of RSNA
A brain MR could help diagnose vascular cognitive disorder in patients without obvious signs, such as a large stroke.

In a new study published online in the journal Radiology, National Institute for Health Research-supported scientists at the University of Nottingham in Nottingham, England, used an MR technique called diffusion tensor imaging to reveal a link between microscopic damage to tracts within the brain’s white matter and cognitive performance.

The technique is promising for the diagnosis of vascular cognitive disorder, caused by disease that damages the brain's blood vessels, which can be difficult to distinguish from Alzheimer's disease and other forms of dementia, the researchers said.

"There is currently no blood test or clinical sign that can reliably distinguish vascular cognitive disorder from other dementias such as Alzheimer’s disease," study co-author Dewen Meng told HCB News.

For the study, the researchers looked at the results of brain MR using diffusion tensor imaging, which measures two key components of microscopic brain damage, along with cognitive exams of 108 patients with symptomatic carotid artery disease, which means they were at risk for developing vascular cognitive disorder. The researchers found that the patients with chronic vascular disease-related lesions also had impaired cognitive performance.

The findings suggest that one of the mechanisms underlying vascular cognitive disorder is subcortical disconnection, or a breakdown in communication within the brain.

Further research will look at changes in patients over time to track the progression of subcortical disconnection and use imaging to assess treatment.

While no drug has regulatory approval for the treatment or prevention of vascular cognitive disorder, some published research indicates that treating risk factors, such as hypertension and diabetes, may prevent or slow the disorder's progression. Also, some treatments for Alzheimer's have been shown to have small positive effects on vascular cognitive impairment, Meng said.

"Several cognitive rehabilitation and cognitive training interventions seem to have beneficial effects on dementia patients, however, more research needs to be done to verify," Meng said.