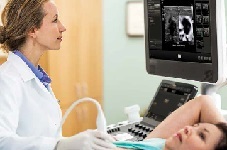 Since about three-fourths of premenopausal women and about 40 percent of postmenopausal women have dense breasts, 27 states have enacted laws that require physicians to inform their patients if they fall into that population. But the question is, what should be done after the patient receives the letter? Many experts believe that ultrasound should be the next step, since it involves no radiation, is less expensive than MR, and has been shown to find additional cancers. But ultimately, it comes down to what the physician and patient decide is the best option.

“The kinds of cancers you detect on breast ultrasound are tiny cancers,” says Dr. Marcela Böhm-Vélez, radiologist at Weinstein Imaging Associates. “Those are the kinds of cancers we want to find because we want to be able to give that woman options for treatment. The earlier you treat breast cancer, the more likely that it will be cured.” In her practice, Böhm-Vélez uses Philips Healthcare’s EPIQ ultrasound system on patients with dense breasts. She chose this system because it’s equipped with technology that improves the characterization of masses, differentiates between normal fat lobule and hypoechoic masses and detects calcifications seen by mammography.

However, with the advent of tomosynthesis, many of her patients are questioning why they need an ultrasound exam anymore. It has been proven many times that if you add ultrasound to a mammogram, you will find more cancers, but the same results have not been found with tomosynthesis yet.

The University of Pittsburgh has a study underway that is having patients with heterogeneous or very dense breasts undergo a tomosynthesis exam and then an additional ultrasound exam to determine if it adds any value. Böhm-Vélez is confident that ultrasound will be found to be useful, because the American College of Radiology Imaging Network (ACRIN) study and other earlier studies have already shown that if you perform an ultrasound exam on dense breasts, you will find cancers that could not be detected by mammography alone.

Ultrasound is often criticized for its false positives and the anxiety it creates. But at Böhm-Vélez’s practice, she is able to perform the mammogram, ultrasound exam and ultrasound core biopsy, which can usually take up to two weeks, on the same day. “If it was a false positive and it wasn’t cancer, the patient is relieved that everything was done as soon as possible,” she says.

Automating the exam
“Automated breast ultrasound is essentially going to replace handheld ultrasound scanning of the entire breast,” says Sankar Suryanarayanan, general manager of GE Healthcare ABUS. It’s a bold statement, but he says the industry is realizing the importance of automated breast ultrasound (ABUS) because of dense breast tissue. The challenge with handheld ultrasound is that it’s manual, so it’s not a practical method to screen or assess women on a population basis.
1(current)
2
3
4